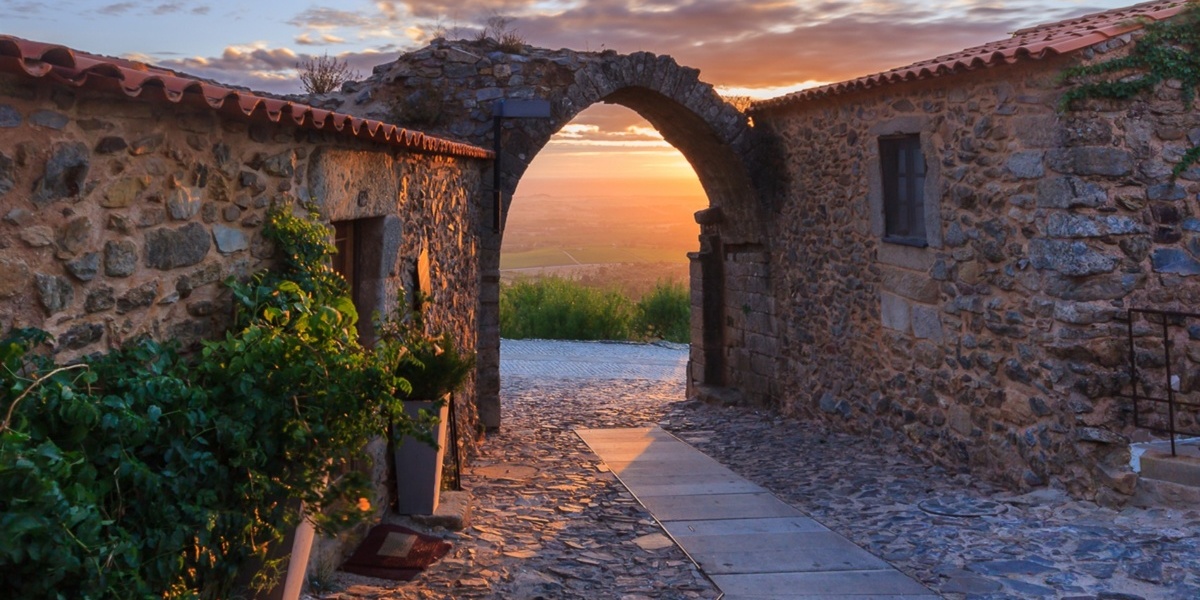 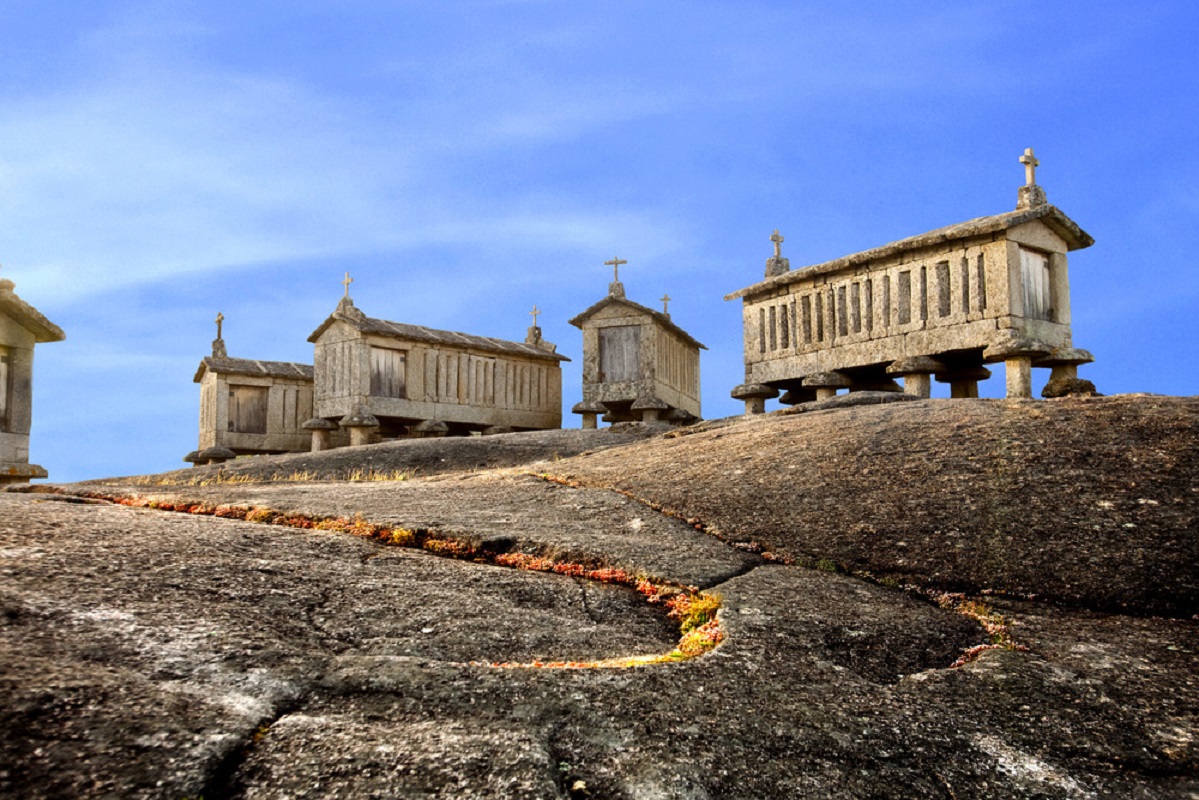 Time has slightly changed the pace of life in these beautiful small villages in Portugal.

These are unique places, away from the crowds, where you can discover the most genuine traditions, cultural heritage, and the unique character of its people. People are proud of their roots.

From enchanted villages hidden in the mountains to traditional coastal fishing villages, these are some of the places that you must include on your visit to Portugal.

Rio de Onor is beautiful and one of the most emblematic villages in Portugal. Located in Bragança, near the Montesinho Natural Park, in the Trás-os-Montes region. Crossed by the border with Spain, on one side is Rio de Onor, and on the other, Rihonor de Castilla. One village, two countries.

With ancient roots and cultural heritage, this village has its own dialect – the rionorez.

A place to discover, and a unique and enriching experience.

The village of Soajo, in the Peneda Gerês National Park, is better known for its famous Espigueiros, built on top of the granitic slab.

This village offers magnificent views of the mountains surrounding it, and it’s a perfect destination to explore by trekking. Be sure to visit the historic center of the village, and enjoy the architecture and streets with their granite slabs, which also preserve part of the medieval layout.

A peaceful place to enjoy nature.

Lindoso is a picturesque mountain village, located on the Spanish border in the Peneda Gerês National Park, on the south side of a mountain in the Serra do Soajo.

Due to its geographical location, for many centuries Lindoso played a key role in the defense of the Portuguese frontier. Particularly during the War of Restoration between Portugal and Castile, in 1640. We can still see this historical heritage in the well-preserved medieval castle, built in the 13th century.  Outstanding among the landscape we can see an interesting group of espigueiros (granaries)of the 17th and 18th centuries.

This is a place filled with history, culture, and people proud of their legacy.

Located in central Portugal, in the Beira Interior region, close to Serra da Estrela mountain. Engraved into the slope of a steep elevation, Monsanto rises proudly with its granite houses.

Afonso Henriques, the first Portuguese king, conquered Monsanto from the Moors and offered the village to the Knights of the Temple. They rebuilt the castle that once belonged to the Romans.

The village, which was considered the most Portuguese village in the country in 1938, still preserves its medieval characteristics, with its narrow alleys, surrounded by stone houses carved into the rocks. Enter the castle and from its walls enjoy a magnificent view.

This medieval village rises at the top of an isolated hill, offering a splendid view over the mountains, and the deep Valley of the Douro River.

It was conquered from the Moors in the 11th century by the Kingdom of León (Spain) and became part of the Portuguese territory in 1297 with the Treaty of Alcanices.

The village of Castelo Rodrigo still preserves its medieval references, surrounded by imposing walls that preserve the heritage of constant disputes over the territory, between Léon and Portugal.

Located in the Açor mountains, in the center of Portugal, the picturesque little village of Piódão is surrounded by an astonishing landscape, grasslands, and springs. Built-in terraced slopes, the village sits in glorious isolation, the schist houses with their doors and windows painted in blue, in the magnificent green landscape.

A historical village that has never really played a major part in the history of Portugal.

However, it is said to have been a place where fugitives could escape justice, and this may have been the case for one of the perpetrators of a particularly dark episode in Portugal’s history. In the 14th century, one of the murderers of Inês de Castro may have hidden here to escape the fury of prince D. Pedro.

A schist village, hidden between mountains. It is called a schist village because of the stone used in the construction of the houses.

Explore this beautiful village deep in the wild nature of Serra da Lousã, in the center of Portugal, where you will find a magnificent landscape and where deer, roe deer, wild boar, and many other species lurk.

A perfect destination for leisure or active sports, or simply to enjoy the quietness of the surrounding nature.

Protected by mountains, Drave is a mythical, inhabited village lost in the mountain. It is only possible to reach the village on foot. Here there is no electricity, no tap water, no gas, no mail, no telephone, and mobile phone service only in some areas. Despite this, Drave is enchanting. A place that will make us travel back in time, to the rural times of the past centuries.

We suggest a jeep tour starting in the remote village in the Arada mountain. This region had singular importance during the two World Wars of the last century. Wolfram was extracted from its underground and then exported for the manufacturing of war material for the Allied forces.

A place to enjoy nature and to embrace the silence of the mountain.

An ancient medieval village that still preserves its ancient rural beauty. Located in Arcos de Valdevez, in the beautiful Minho region (in Northwest Portugal). It is famous for its terraces built on the slopes of the mountain. These curious structures that make this village so unique allowed for the development of subsistence agriculture, extremely important for the survival of rural communities. And because of this landscape, it is called “Portuguese Tibet”.

It is a perfect place to explore and we suggest that you take the Ecovia do Vez, one of the most beautiful hikes you can take in Portugal, with small cascades flowing into the Vez river, rapids, and obviously the terraces of Sistelo.

Porto Covo is a friendly fishing village on the Alentejo coast (in the South of Portugal), surrounded by magnificent landscapes and beautiful beaches sheltered by sheer cliffs. A typical Alentejo village with small white picturesque houses.

This village was rebuilt by the Marques de Pombal (The King’s Chief of Office) after the 1755 earthquake and still preserves its traditional ambiance that offers such beauty and charm.  Close to Porto Covo is the abandoned Ilha do Pessegueiro, an Island that has been a source of inspiration to poets.

A perfect place to relax and take a swim in the beautiful Atlantic.

Portugal has many secret places to discover, small, charming villages where you can find the most genuine traditions. Contact our team to know more about Portugal’s typical villages.

0
0 Comments
Portugal Villages, Travel to Portugal, Visit Portugal
Culture, Gastronomy, Heritage, Nature, Safe Travel, Travel, Wine&Food
previous next
We use cookies to ensure that we give you the best experience on our website. If you continue to use this site we will assume that you are happy with it.OkPrivacy & Cookie Policy